Using Samsung Slates, art production was probably the most creative role. Instead of sourcing props and costumes, this role involved drawing on the screen with your finger or a stylus to animate the video and enhance the visuals around the person being filmed. The Samsung camera allows you to draw your own pictures on screen and then shoot; or to use preset frames, filters and animated emotions – or a mixture of both.

Given some roles carried a heavier workload than others, students were able to rotate through roles and gain a fuller experience of film-making. The acting role was somewhat challenging and could be done in a group, which would have the potential to make reference to the team singing the song after they win a game.

Though we talked at length about how to make editing easy, probably the hardest aspect of the activity is to edit the song together so that lip sync is achieved. So we have more thinking to do with the editing process and applications that might suit this activity.

AFL club songs are great and I love “Join in the Chorus” http://www.nmfc.com.au/video/2013-06-02/join-in-the-chorus. The lyrics are rousing, joyous and speak to the heart – making all True Roos feel proud to belong. But the beginning of the song which the players sing at the end of matches, is not recorded in the official release of the song, so it doesn’t present an opportunity for lip syncing http://www.nmfc.com.au/fans/multimedia/theme-song. After we ran the activity, we wondered whether we should ask students to video a rendition of the Hearts to Hearts verse – we may try that another time!

The best thing about the whole activity, is that it just made us laugh. I still laugh watching and thinking about it and I loved the way the students had fun with this and threw themselves into it. 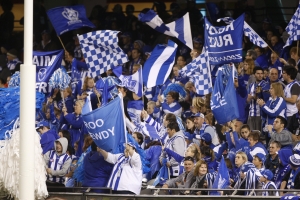 Community engagement through the arts and education. Musician and composer. I initiate and develop community arts and education projects to improve social cohesion including: education programs at The Huddle, arts projects, digital storytelling to inspire creativity, build identity and belonging and empower diverse communities in a range of settings. View all posts by maireadhannan